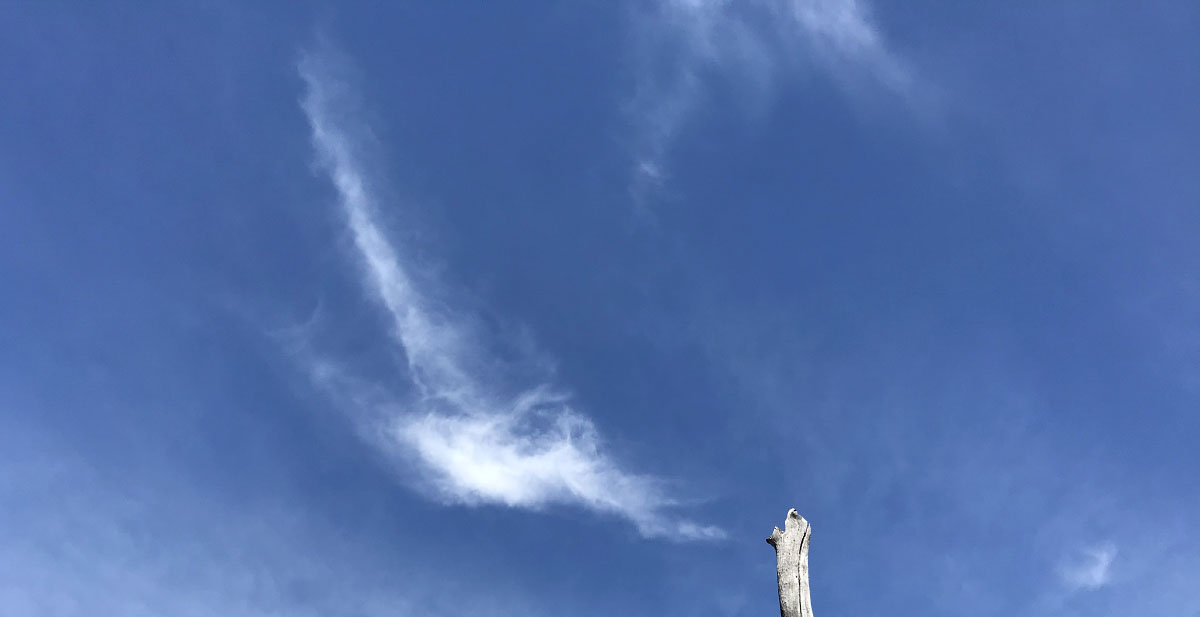 How To Stop Thinking

The question comes up when it begins to dawn on one the importance of thought and thinking in one’s life and in one’s outlook and happiness. One begins to see how much negative thinking, overthinking, or thought itself interferes with relationships, work, and general happiness. You start to see your “problems” are not really “out there”, and if not entirely in your head, then at least mostly or partly in your head. You start to realize that thought is like a screen or filter through which life is seen, and the vibrant aliveness of the moment is not experienced. Or, you are just so damn sick of listening to your own thinking, and it’s driving you crazy, or distracting you: the endless pointless arguments in the head, the dialoguing and the chatting brain, daydreaming, fantasy and feelings borne of memories and worries, and on and on. The varieties of thinking, and the problems it causes, are endless. Overthinking, a busy mind, and out-of-control (and negative) thinking are quite obviously at the root of stress, mental disturbance, disharmony and conflict. (Or it may be becoming more obvious to you).

You may be on a spiritual path or doing some kind of practice such as meditation, or learning about a spiritual psychology path like the Three Principles Psychology, where the thinking is looked at as key. In the Three Principles Psychology and in neo-Advaita teachings, one can supposedly shed all this extra thinking through a simple understanding. One becomes aware that “it’s all thought” or “its all just happening”, and may be encouraged to accept or embrace all experiences. This is good in theory, but in my experience this only works in some limited cases (anecdotally) but not very often, and not in my own personal life experience (the most important criteria!).

In meditation one is told to become aware of thoughts, let them go by like clouds, let them arise and dissolve, and gain a calm and clear mind. “Don’t hold onto or attach to thoughts” is a typical meditation instruction, such as in mindfulness training.

At an even deeper level, we are told, or come to understand, that if one can really stop thinking, a profound state of being could be experienced, such as non-dual awareness, a “higher state of consciousness” or experience of self-realization (discussed thoroughly in countless places: this article only scratches the surface of a very deep subject).

So given the fairly obvious value and desire of stopping, slowing down or at least calming and quieting the thinking — stilling the mind — how is it that it can seem so hard, or so tricky to pull off? And even when achieved for a time or to a degree, why can’t a quiet mind be maintained?

It’s a question that took me over 30 years to answer. And, now that I have an answer, I’m finding it harder to explain than expected (the article “True Meditation: A Quiet Mind Versus A Silent Mind” was an attempt).  Even with friends with decades of experience under their belt in meditation, seeking spiritual understanding with various ways and means, practices and studies, it’s been difficult to convey. What I say seems to “fall on the ears of the listening mind” as the mystic Sydney Banks used to say about trying to explain his major insight experiences. It’s difficult to explain not because it’s complicated or takes a lot of knowledge, but just the opposite: it’s so simple. In fact I  have a hard time even grasping it myself! That may sound funny, but it’s a reflection of the fact that the mind is limited in what it can know, and what it’s good at. The mind is good at and attracted by complexity. Simplicity and matters of the heart “do not compute”.

The mind is good at dealing with content, with adding and maintaining (learning and accumulating), with particulars, with objects in consciousness and material matters, processes and techniques, goal-oriented behaviors, stuff in time and space and linear reality, and maintaining social programming and linguistic expression. It’s like a giant biological computer, reflected in the fact that we have brains (although that too appears in our minds, and an appearance, image, a concept and set of ideas, data and memories!). Minds are good for personal purposes and doing things in the world. But what we want here, in this stopping of thinking, goes beyond the personal.

First a definition to help in clarity. I call “mind” the sum total at any moment of the objects of consciousness, the basic furniture of experience: bodily sensations, sense perceptions, and thoughts. We are giving a name, a noun, to what is really a verb, a movement. Thinking is the images and concepts, memories and sounds in and of the mind. So it would seem that all our knowledge comes from that collection. But is that all there is to the mind or to experience? No.

There is knowledge that is direct and unmediated by representations, images, or thinking. And that’s where we want to go, or realize.

Let’s get one thing out of the way right at the start: thinking is not bad or something to be frustrated about. Even very great sages still have thinking going on, only they have a very different relationship to it (more on that later).

Two bits of a warning or disclaimers: one, what I’m going to reveal may sound rather paradoxical or even crazy, and two, it does probably require that you have a certain amount of mental stability, clarity and calm to begin with, in order to “see” what I’ll be pointing at.

How to Stop Thinking

Whatever you were practicing, stop it. Stop it completely.

Anything you do is a doing, not a being.

Whatever you try and do as a person, by your own personal will, is using the mind. So you are using the mind to try and stop the mind. It’s a conflict. The “I-thought” is a thinking activity, and it is thinking that we want to stop. It’s a battle you cannot win.

The mind does not want to die. It has been trained to maintain itself. It’s like a computer program in an endless loop. The assumptions behind this ceaseless effort are that the person, or what you are, is a separate and limited being, and not adequate or whole in itself. The chattering or yelling monkey-mind fears it’s own disappearance, is on insecure ground.

The fact is, what we truly are is effortless, and without personal will or “doership”. We are not living our lives, we are being lived. And the “being lived” is infinitely more intelligent, perfect and appropriate to the moment and the exact needs, then any person can manage. See that there could not possibly be any local, central controller in reality, for what would be controlling it – some entity further back? Where does the buck stop that is not just an idea? Where is the you that you could call you?. But as long as we are contracted and tense, and trying to live from that illusion, things will seem difficult and uncomfortable. Suffering comes from this mental living, which using the wrong GPS.

In order to stop thinking, we must do nothing, because we are nothing. Thus one is aligned with True Being.

“Mr. Ramamurthi: How to know the ‘Real I’ as distinct from the ‘false I’.
M.: Is there anyone who is not aware of himself? Each one knows, but yet does not know, the Self. A strange paradox.
The Master added later, ‘If the enquiry is made whether mind exists, it will be found that mind does not exist. That is control of mind. Otherwise, if the mind is taken to exist and one seeks to control it, it amounts to mind controlling the mind, just like a thief turning out to be a policeman to catch the thief, i.e., himself. Mind persists in that way alone, but eludes itself.’ ”
~ Ramana Maharshi

By “doing nothing” I am not saying to do no actions with the body — the body goes on doing whatever it needs to do as the faithful artistic organism instrument — nor am I suggesting you quit your job and go live in a cave. It has nothing to do with your body. “Do nothing” is regarding your mind only. It is a recognition that the habit of reacting mentally must stop. In the East they call it the law of Karma, and stepping off the wheel of life and death. By reacting you are repeating the action of the mental machinery, the mechanism that keeps the false self going, the robotic human that shields and veils the flowering of true selfhood. True selfhood is the innate, naturally loving, giving, happy, free and peaceful being you were meant to be.

What do we react to? We react to thoughts and feelings, and we react with thoughts and feelings. So we are in a prison of our own device. But are thoughts and feelings us? Why do we treasure them, value them, identify with them? We are trained this way, from an early age, unconsciously and automatically. It gets passed on from generation to generation, down through history. However, ultimately the “why” doesn’t matter. What matters is liberating yourself, Now, from this training, these habits.

There is a recognition that a quiet mind goes beyond anything that can be created, manufactured, enforced or contrived through practice or effort, but is in fact that very silence we are made of, our inherent truth as a transcendent reality. We were trying to get someplace and make something happen, but that very effort takes us away from it. This is corroborated from so many directions that it is very reassuring to discover: you’re on solid ground, not only existentially but proven (in experience) by countless others. I will only mention one corroborator here for now,  by way of the famous saying by St. Francis of Assisi:

“What you are looking for is what’s looking”.

Another obstacle is the sheer momentum of the thinking, its speed and weight. Like a car traveling very fast, it cannot slow down immediately but needs some time to come to rest.

The Irrational: There is also the fact that unconscious patterns of thinking may be operating. These patterns have been laid down over a long period of time, and are let go and de-programmed in large chunks quickly or in smaller chunks over a greater period of time. It’s been called the “thousand deaths” and these ego patterns are dissolved in the light of awareness as they arise and die. A still mind allows Consciousness to shine, and that is a powerful solvent. Many techniques have arisen over the centuries (such as yoga in the Kashmir Shaivism tradition) to help dissolve these patterns of energy — leftovers of ignorance, such as patterns of fear and aggression — by addressing the experience of the body for example. But in the end, it is always conscious awareness with its innate, natural  intelligence that does the work, not the personal self or will. At some point in any case, no such work is needed: the unveiling of the true Self is effortless grace.

You’ve heard the saying “You are your own worst enemy” and “I only needed to get out of my own way”. Well that is true here, only more so. It goes right to the heart of the matter.

Why did it take me 30 years to realize this? Because I was too smart and too disciplined for my own good. Discipline and intelligence are already qualities of our true nature. We don’t need to add or manipulate them, only “align” with them as it were. I also had many misconceptions and beliefs in the way of true seeing.