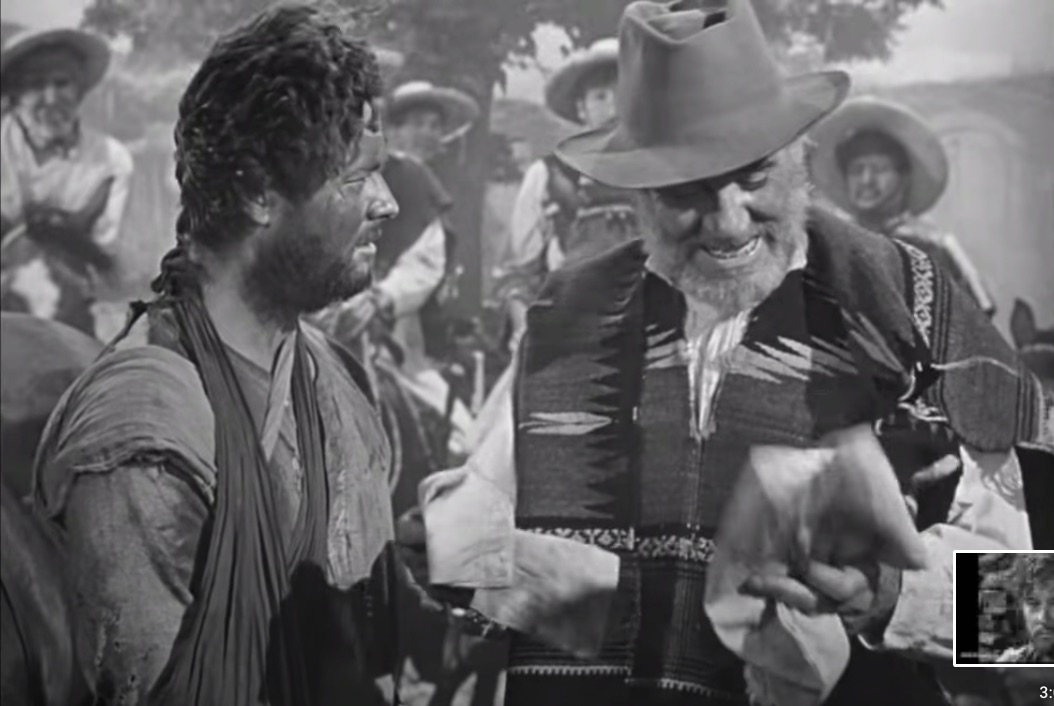 The Treasure of the Sierra Madre (1948) – final scene, a Great Joke

The Radical Journey of the Non-Dual Path

I have written before about how the non-dual understanding, or the living of it (the most or the essential thing) is the final stop on the “spiritual” journey. It’s the end of the road, because then, there is no seeker. It it the dissolution of the sense of a separate self, and the seeing through the belief that there ever was such a thing to begin with, and that experience shows it was a mind phantom, a fantasy, a bit of fevered imagination as it were. And in any case, if you’re happy and living harmoniously, at least most of the time, who cares about anything else, such as obscure philosophies (unless it comes up in conversation), or crazy goals like becoming “enlightened” or “awakening” and all that fun pursued by a separate self (the myth of enlightenment)? Unless you just want to have fun and play as Consciousness of course (the celebration)…

The non-dual message is too radical: it puts the cart behind the horse, it asked us to turn the telescope of being around and look through the other end, because we’ve had everything backwards most of our life.

When people hear the word “spiritual”, they think it has to do with behavior, with ethics.  Or they see it as practices, or a new set of beliefs, or self-improvement. Something to do with people in other words, or with God, or religion, or social practices, or lifestyle choices, ideologies, re-programming the human, the body, the mind… but these are all effects, not Source, not Intelligent… nothing wrong with them, but not getting to the core, the “message”, the reality.

But what we are talking about here is looking at is what humans appear in. Looking towards Reality, to see what the facts are, we bring in all the tendencies, what we’ve learned – a whole host of concepts, beliefs, feelings and opinions, images, judgements and ideas.

Even to simply sit quietly and observe one’s experience, can you actually experience anything that isn’t through a filter of mind? In other words, can one experience perception or even reality, as a raw experience, without mind interference, so to speak? Here of course we have to define what we mean by “mind”. If we use the definition of mind as sensations, perceptions and thoughts, that is representative of any *thing* that is immediately, experienced right now (well, except for consciousness, awareness itself – but let’s not get ahead of ourselves). It covers all the immediate subjective contents. It does not cover the details of the contents – in other words, the concepts we have for the contents, such as a thought about a car, a thought about a person, a perception of a bird singing, the sensation of the chair on the back, etc. So all the contents of experience can be lumped into sensations, perceptions and thoughts. That is what is presented to “us” at any moment.

But of course, that’s already a concept: to lump things into these categories and label them is after-the fact. We are using this concept of “mind” and we are using the concepts of “sensations, perceptions and thoughts”. So there are two things going on here: the raw experience of those “things”, and the concept of them.

So we have the *raw experience* of what we are (after-the-fact) calling “mind” and the *raw experience* of what we are calling (after-the fact) calling “sensations, perceptions and thoughts”; and then we have the *concepts* (after-the-fact) of mind and its contents (sensations, perceptions and thoughts). The language and the concepts the language is pointing to. What is concept though, other than an image, a sound, a repeated content of mind we used to process. Ideas and concepts are all thoughts – internal, “subtle” (not gross, outwards )sounds and images.

The concepts are thoughts, so that is part of mind also. So the concept of “mind” appears in the mind! A chicken and egg situation from which there is no way out – unless “mind” is seen in its greater context.

To get to this greater context, the only way out, fundamentally, so as not to continue the mind game forever, is to go to experience and not thinking about experience, but the immediate, raw experience itself, now. (in some traditions this is called “meditation”; in some it’s simply a pointing, or an “understand”, and “aha” experience, etc.)

What is radical then is to point to (or attempt to, since it’s simple but not easy) what they appears in. What does the experience of mind appear in?In other words, what does the experiences of the sum totality of current sensations, perceptions and thoughts appear in? Why, they appear in me of course – in what I am. OK, what is “me”, what is I Am? Well that’s the whole question isn’t it. That’s why they call it “self-inquiry”.

(When I pick a quote “at random” for my group or for an article, the reason this can be done and I find a totally relevant quote, is not because I’m special, it’s the exact opposite – it’s because I’m *not* special. The robot bodymind Eric is allowed to serve as it were. This is all a way of framing the fact that it is all of one whole cloth, the movement and the reality.

I will try it right now – a friend just sent via a text message as I was writing, a PDF file as a gesture, since I’d sent her a meditation – just something she wanted to share – it was not something I’d asked for or expected. I dont’ even know what it is, except that it looks like it has something to do with Ramana Maharshi. Opening at random and picking a page and some paragraphs “at random”:).

“Dnyaneshwar : The best samadhi (concentration) is not to be a mere blank but, like meeting blow with blow, to engage in the affairs of the world and check the sense objects, and be indifferent to them by opposing them with the sword of steady jnana (realization of unity), like Janaka*.

Vithoba : Only Suka, who got rid of all attachments, was able to conquer the monkeyish mind, which had accumulated within it many vasanas (deep-set desires) during countless generations, and not janaka, who, without being in the sleep-like state, had steady jnana that he was Brahman.

Dnyaneshwar : only Janaka secured annihilation of mind and was able to do what he pleased with his mind, and not Suka who gave up all external attachments and betook himself entirely to life in forests.

Dnyaneshwar : As we administer one poison as an antidote against another poison, he alone is wise, who instals imperturbable jnana against the dangers of the sense organs, both external and internal, and not he who is always in nishta filled with fear lest at any time the wild beasts of sense-objects should come and attack him. This latter will realise only his fear and never the supreme bliss of Brahman.”

This is interesting and relevant because the journey of late, here, is that of it all becoming more experiential, and as a corollary being harder to describe, especially in the moments of bliss and silence from the Source.

In the nondual arena, you get folks that are arrogant, or that were already that way, but in any case the non-dual spiritual path is the final crown in their self-aggrandizing spiritual journey of wanting to know something, or have something, or own something, or be something, be someone, have an advantage. The glory and purity of being special, whatever … and nothing could be farther from the truth.  You might have a laugh, but then it’s gone. It’s like the classic Humphrey Bogart movie, The Treasure of the Sierra Madre: at the end of the movie, the bags of gold all blow away in the wind, and the scrappy wise old character has a good laugh…