The Paradoxes Along the Path

The paradoxes revealed when one looks very deeply into philosophical questions and, at some beautiful point, sees out the back door into the Land of Truth, after grace bestows light upon the limited human mind, is the Land of Paradox revealed looking back through the door at the mind from the impersonal awareness of Consciousness.

However, I notice as one progresses up the mountain, things get more and more paradoxical as you start to see two sides of the coin at once. However it’s comforting to know paradoxes are only puzzles to the mind and not in reality. The mind sees in, or spawns, or is duality, but reality sees in unity, resolves paradoxes effortlessly.

The "great" Western philosopher Immanuel Kant presented what be termed “Antinomies”: timeless opposites that can’t be avoided when trying to understand the absolute in terms of the relative, time in terms of the timeless, etc.
“Immanuel Kant's Antinomies, from the Critique of Pure Reason, are contradictions which he believed follow necessarily from our attempts to conceive the nature of transcendent reality.” (Wikipedia)

There are many paradoxes one encounters, or should I say can "glimpse", along the path towards knowing one's true nature. As you notice how your experience is formed and get clues it's not just given by outside events, you start to detect that there's something rather subtle and and amazing going on behind it all: like getting a glimpse behind the curtain in the Wizard of Oz. Or the physicist trying to pin down a particle with his instruments, and the particle not behaving as a particle or a wave, but both, depending on how he looks at it.

Unlike the Wizard of Oz situation however — instead of finding out it's all just a show run by a particular showman — it's a show run by... something rather hard to define: Some show-making source we could call "Consciousness" or the formless. That reality, whatever it is, that is reading these words right now. The perceiver of perceptions. The Perceiver-in-Chief as it were.

In these intimations of reality behind and beyond perceptions, to the source and ultimate substance that is not a substance but the formless, we start to see many paradoxes: seeming contradictions that belie an underlying unity.

A paradox is understood to be two things that are seemingly contradictory yet at another level actually being both true at the same time.

Why are there so many seeming paradoxes in spiritual truths?

The short answer is, Reality is One, but the mind deals in duality.

The longer answer is, Reality, in order to see itself, creates a not-self. Sort of like an invisible magician of infinite power existing in a universe of pure potential of it's own making, gets bored and decides to see if he can see what he looks like. So beings come into existence, but for something to appear as if it's separate, there has to be distance, thus space, and that implies time to traverse space if you are a part of it and not the whole thing.

Reality, that absolute one-ness, in order play the game of life, that is, have an apparent universe, time and space, an apparent separate self, and therefore a non-self, and endless objects of consciousness, must have duality for there to appear to be anything. So a point of view arises we call ourselves. It seems to have some kind of linear existence, and makes language to help put thoughts in forms for seeming others. So of course language is linear, but nonetheless can evoke the nonlinear. (That's why we have poets and artists: the perfume of the absolute, if you will: truth love and beauty are qualities of what Is).

Remember the very first stanza of the Tao Te Ching (one of the greatest, most timeless wisdom teachings in existence):

The Tao that can be told is not the eternal Tao.
The name that can be named is not the eternal name.
The nameless is the beginning of heaven and Earth.
The named is the mother of the ten thousand things.
Ever desireless, one can see the mystery.
Ever desiring, one sees the manifestations.
These two spring from the same source but differ in name; this appears as darkness.
Darkness within darkness.
The gate to all mystery.

Like subatomic particles springing forth as opposites from nothing (which has been observed by physicists: it's called Quantum Vacuum Energy), the play of opposites is what at every moment is creating an apparent world. To go from nonlinear, unchanging reality to linear appearances, you need differences, measurements, change, up and down, light and dark, negative and positive, near and far. Movement. 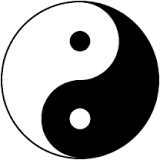 Love has no opposite, but in world there appears love and hate. In the world there is flux and the rising and falling of all things.

A sage knows there are no-things and that he or she is no-thing.

At moments an ordinary mortal can get a glimpse that unifies the opposite: a sense of something insensible and invisible, that shows truths that transcend opposites. But since these glimpses are timeless, and the mind deals in time, it cannot hold on to them, except as images, sounds, or feelings in consciousness. 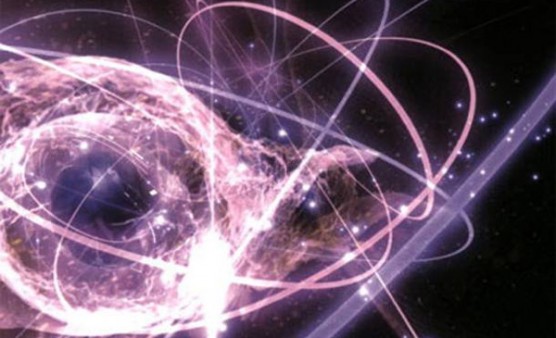 A Side Note on the Paradoxes of Liberation, Self-Realization, Freedom, the Direct Path:

Yes, it’s all very paradoxical. To the mind. Because what we are dealing with is doing something that can’t be done, with a person that is not a person, wanting a state that isn’t a state, wanting something for a being that has it all because they are it all, loving when there is not a lover and a loved but only one love, desiring a thing when there are no things, seeking when you are the sought… shall I go on? How about:
Feeling a failure at something that takes one beyond success and failure, making so many mistakes when there are no mistakes, feeling flawed and wrong for feeling flawed and wrong, wanting to use the head to get out of the head.
Does the universe have self-esteem problem? The artist wants beauty and perfection, but physical life comes up short.
Going beyond the body, realizing one is not a body, (seemingly) via the body.

Yet we are all, at the same time, unique expressions of what is ultimately just One, appearing as infinite variety and diversity. Difference in unity.

In any case, I thought it would be interesting to start listing (I like lists) some of the paradoxes my mind spit out along the "pathless path" (the direct path).

From the perspective of a self, or a person, a seeming psychological entity, one may notice these paradoxes of unfoldment into truth:

Practice to find out no practice is needed; Try to Relax; Trying to be Yourself: The Seeker is the Sought
• You've probably laughed at this paradox: "trying" to relax.
• And the mental state of meditation offers another seeming paradox: Don't focus or make an effort – just relax the attention to allow a de-focused state. This state is natural and pre-existing.
• And the likewise funny paradox of the time it takes, or rather think it takes, assume it takes, believes it takes, to realize one's true nature: if you go to enough retreats, meditate long enough, spend enough time and effort in practice and seeking, through time you will realize the timelessness of yourself (what is). It was all a charade. You can throw away the scaffolding you needed to get where you already are.
• Causeless happiness will be caused by doing stuff (such as meditation, loving your guru...).
• Seeking is what is keeping you from finding what you are seeking. Your best, truest, highest self is when you stop stop seeking your best, truest, highest self (so don't hold on to anything, and surrender what didn't exist in the first place to God).
• By losing yourself you find yourself.
• All the effort it takes to realize effortlessness – effortless awareness, effortless doing, effortless manifesting and effortless enjoying... how exhausting!

Change & The Timeless
Your evolution and change are grounded in the timeless and unchanging.

In Realizing Your Subjectivity You Become More Objective
It points to the most subjective thing – the self-created nature of our experience – yet allows you to be more objective.

Effortless Learning and Creativity
It's easier to grasp or learn if you don't try too hard. When you relax, you can get an "Aha!" moment, and see a self-evident truth in an instant.

Results from Detachment
The less results matter to us, the more likely we are to live in the present and create good results. This is called detachment.

The Unknown is Pointed to With The Known
Talking about the Unknown can only happen via the known. At the highest level, this is called mysticism.

The Vehicle is not the Journey
You are ultimately responsible for your thinking but not Thought itself. This is called the personal and the Impersonal.

Your self is and is not the Self
You find yourself when you no longer know who you are. This is called the True Self.

Suffering is Voluntary (if you only Knew It) – We Don't Want What We Want
To try and end your suffering, don't try and end suffering. Don't give it a Second thought. This is called Letting Go.

Real Illusion
Thought is not Reality. Yet it is the only reality most of us know. This is called the Great Illusion: everything is made of Consciousness (or Mind if you like), so even illusion has reality. Our experience is a real illusion.

Free Will is Fate
An act of free will is fated. It is fate for you to have free will. Get over it.

Perfect Imperfection
Even in the seeming imperfection of life and ourselves, there is the grand play of the whole, which is perfect, infinite, and complete. This experience is called being human.

There are many, many more... these were just what I thought of when I wrote this.