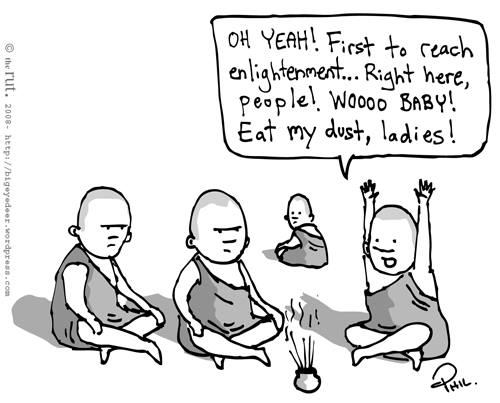 The scene: a non-duality spiritual retreat. Someone gets up, in the evening, after the meditation and dialogue, when announcements are made:

“I have a little announcement. Since everyone here is interested in not only becoming enlightened—or perhaps thinks they already are—and furthermore would love very much to gain full recognition for it and prove something to their friends and neighbors, showing how Absolutely cool they are as the Ultimate I AM… we are going to be putting on the Non-Duality Race Event.

Er, we haven’t nailed down the time yet …

The rules are, the first one to the finish line, that is, the first one to become enlightened, be certifiably Self-Realized and Awakened, wins the prize! They will get a trophy from our teachers, Francis and Laura, and more….

Um, we haven’t quite yet worked out how to judge the certification criteria… we’re thinking maybe either nail you to a cross and see if you don’t complain—at least to any humans—or have you manifest something tangible from an Impersonal Desire—um, preferably a large sum of cash—which you will [cough] transfer to the contest organizers since you are unworried about outcomes or anything else, and unattached to objects.

We are also un-causably happy to announce that Miss Cosmic Consciousness USA has volunteered to be the hostess at the awards ceremony. You might even get lucky and get more than a congratulatory kiss from her. Or if you’re not identified as a woman, rather than not identified as a man, a date with Mr. Cosmic Consciousness is in the offing. He’ll be taking you out in his Instantaneous Drive Cosmobile to an vegetarian Indian dinner, then a showing of the movie Dirty Rotten Scoundrels.

In fact since everything has already happened and there’s no cause and effect, and you’ve already won the contest in that timeless sphere of Allness, and you are all-knowing omniscience, we won’t be making the announcement of the time, and will be doing nothing and going nowhere.

So please don’t bother to sign up with no one before you don’t go anywhere.
Thank you for not listening.”